Our Customer Service is open weekdays from 9:00 am to 8:30 pm EST time. Call us if you need help. 718-471-5464
We ship to all US Military Theatres of Operations, all Bases, all APOs and all FPOs. We will match or beat any internet price! 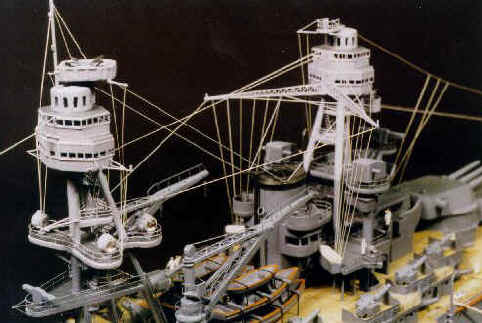 Photo-Etching is available for an additional fee. After adding this product to the cart, please go HERE to see details of photo-etching options. Thank you.

This Pennsylvania class USS Arizona BB-39 battleship kit makes a 17 inch long, full hull version of the battleship that is synonymous with America's entry into WWII. This plastic model kit with 1/426 scale produces a realistic version of this Pearl Harbor 31,000 ton battleship. It is a needed addition for any collector.

SpecificationsDimensions: This battleship kit is 17 inches long and 1/426 scale.

Built as part of America's pre-World War I modernization of the Navy, Arizona began her career as a gunnery training ship and cruised the coastal waters of the Atlantic Seaboard prior to the United States' entry into the war. She later served as flagship of the Atlantic Fleet and of various battleship divisions in the Pacific, including one based at Pearl Harbor. It was there on December 7, 1941, during the Japanese attack, that Arizona's magazines were pierced by a 1,760-lb bomb that shattered the battleship, instantly killing most of her crew and sinking the ship in 40 feet of water. Arizona's burning superstructure and listing masts became one of the most-reproduced scenes of the Pacific war as the nation rallied to the cry, "Remember Pearl Harbor!" One of only two ships not refloated after the attack, Arizona was left a shattered hulk on Battleship Row. In 1948, a flagstaff was attached to the stub of the ship's mainmast and once again Arizona flew the national ensign.

Privately raised funds and a Congressional appropriation built the Arizona Memorial in 1962. This graceful white concrete arch spans the sunken ship and includes a shrine listing the names of Arizona's dead, assembly area, and viewing platform. In 1981, another Congressional appropriation built a modern visitor center that serves as a museum, book store, interpretive center, theater and assembly area for the tour boats that carry visitors to the memorial. Operated by the National Park Service, the USS Arizona Memorial serves as a reminder of the tragic events of December 7, 1941, and of the proud battleship that rests beneath the waters of Pearl Harbor.

USS Arizona is a National Historic Landmark.
Return to the HNSA Guide.