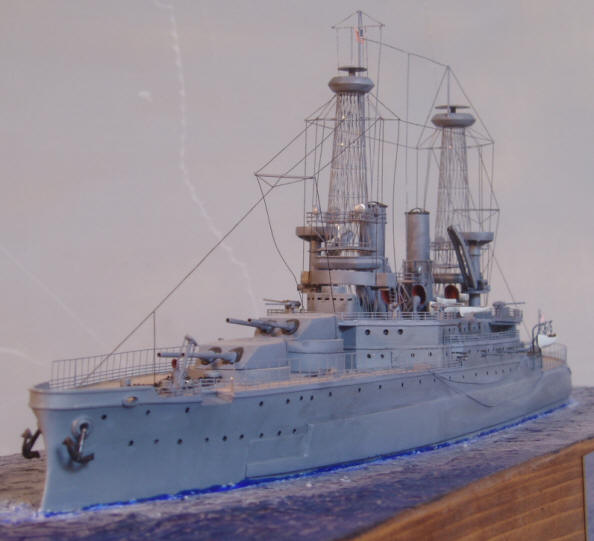 USS Michigan, a 16,000-ton South Carolina Class battleship built at Camden, New Jersey, was commissioned in January 1910. After initial operations along the Atlantic coast and in the Caribbean, she steamed across the ocean to visit England and France during November and December 1910. Michigan spent the next eight years taking part in regular Atlantic fleet exercises and cruises off the eastern seaboard, in the Caribbean and off Central America. In April-June 1914, she played a major role in the Vera Cruz incident, with many of her men serving ashore. The battleship suffered two notable accidents, one in September 1916 when a twelve-inch gun of her second turret burst while being fired and the second in January 1918 when her "cage" foremast collapsed during a storm at sea.

Michigan's First World War operations included convoy, training and battle practice operations in the western Atlantic area. In January-April 1919, soon after the war's end, she was employed as a troop transport, bringing home over a thousand veterans of the conflict. In mid-1919, Michigan passed through the Panama Canal to the Pacific on a midshipmen's training cruise that took her as far west as Honolulu. When the Navy formally adopted ship hull numbers in 1920, she was designated BB-27. Michigan made another long-distance training voyage in mid-1921, this time calling on European ports from Norway to Gibraltar. She was decommissioned in February 1922. Made redundant by the Washington naval limitations treaty, USS Michigan was stricken from the Navy list in November 1923 and scrapped during 1924.