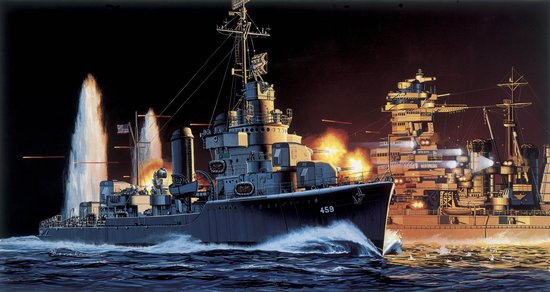 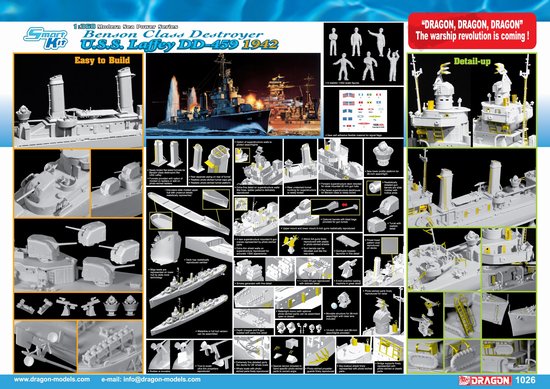 On the night of November 13th 1942, the Japanese naval task force at Guadalcanal came across the battle group of which the U.S.S. Laffey (DD-459) was a part. The Laffey unleashed its firepower on the enemy fleet, and in the darkness it came within 20 feet of colliding with the Japanese battleship Hiei. Launching its torpedoes and raking the Hiei’s bridge with gunfire at point-blank range, the USS Laffey’s crew succeeded in wounding the Japanese admiral. But surrounded by two enemy battleships and two destroyers, the Laffey was finally sunk by a 14-inch shell from the Hiei and a torpedo from the Teruzuki. When its magazines exploded, the 1620-ton USS Laffey sank swiftly with the loss of 59 lives and 116 wounded. This Benson-class destroyer had fought valiantly despite the odds.
This destroyer is the subject of Dragon’s newest 1/350 scale ship kit. Based on the revolutionary and extraordinary USS Buchanan Smart Kit (Item No. 1021), this new model has received the necessary changes to transform it into the famous Laffey. It has newly tooled flat-sided funnels and a forward superstructure bridge that accurately depicts the appearance of the U.S.S. Laffey in its final days. Making widespread use of slide molds, the kit also includes a generous helping of photo-etched parts (e.g. louvers atop the funnel) to provide the necessary level of finesse. The kit also includes a set of six miniature figures with which to populate this brave destroyer. In 1992, a National Geographic expedition actually succeeded in finding the wreck of the U.S.S. Laffey half a mile underwater off the coast of Guadalcanal, but now this model from Dragon brings the destroyer to life again!