This kit features 610 parts on 21 sprues; plus lower hull and waterline plate.
Fully detailed Hangar decks, Flight deck and display stand.
Finished the kit is 30" long, 4" wide. Includes various deck aircraft.
Each kit includes 4 each of the planes listed below plus the planes have
clear canopies (Helldivers, Hellcats and Avengers).
If you liked Trumpeter's Hornet you'll like this one too.
With decals you are able to build the ships marked with YES below. 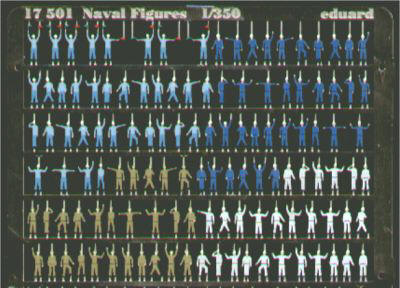 Great picture books to help build your model.
Click the book to find out more.

The Essex class of carriers was, though you may argue that point, in my opinion the best weapon in the world when commissioned, and stayed the best carrier class until the Midway class became available in October of 1945.

The Essex class was the successor of Hornet. Just as Hornet, it was designed after the limitations of the Washington Treaty were lifted in1936, and it was thus not necessary to obey to any rules other than those dictated by common sense. As a result, a class was devised which was to follow five main rules:

Each of these rules was followed. When USS Essex was commissioned into the Navy in early January, 1943, the US Navy had received all it had wanted. The carrier was able to carry up to a hundred planes, and, due to a aircraft lift to the port side oft he flight deck, she was able to recover her planes while storing them in the hangar, and likewise for launching.

The ships were also highly survivable. During the two years the Essex class saw service in the Pacific, none of them was sunk, not even under the worst circumstances. This includes the devastation of USS Franklin, hit by two bombs off Okinawa in March 1945, during the preparations for the landing there. She suffered horrible fires aft, destroying planes and exploding "friendly" bombs. With 724 dead and 265 wounded, the carrier's captain was given permission to abandon the ship, but refused and saved Franklin. Bunker Hill, Admiral Marc Mitscher's flagship, was hit by two Kamikazes in May, 1945, and survived as well, with 389 dead or missing, and 264 wounded.
This may be to a great part attributed to the reluctance of the crews to let their ships die, but also to the rugged construction inherent in this class.

The Essex class saw heavy service in the Pacific, beginning with the occupation of the Gilbert Islands in Mid-1943, and the second carrier raid on Rabaul, with Essex, Bunker Hill and the light carrier Independence. Throughout the war, the Essex class was the spearhead of all Central Pacific operations, and temporarily supported the South Pacific thrust of General MacArthur. Planes from these carriers were responsible for the decimation of Japanese air units in the Marianas, the Philippines, Formosa, and eventually Japan itself. With these carriers, the US Navy build up what was called the "Air Navy", and with these carriers, the US Navy became the most powerful navy in the world.
The Essex class was also highly adaptable to modern technologies, and although not important in the World War 2 context, the Essex class was to receive steel and angled flight decks to permit operation of jet fighters. The service of these great ships was
welcome addition to the US Forces in Korea and in Vietnam.
The last Essex was scrapped in 1989.